An Emblem for the Association 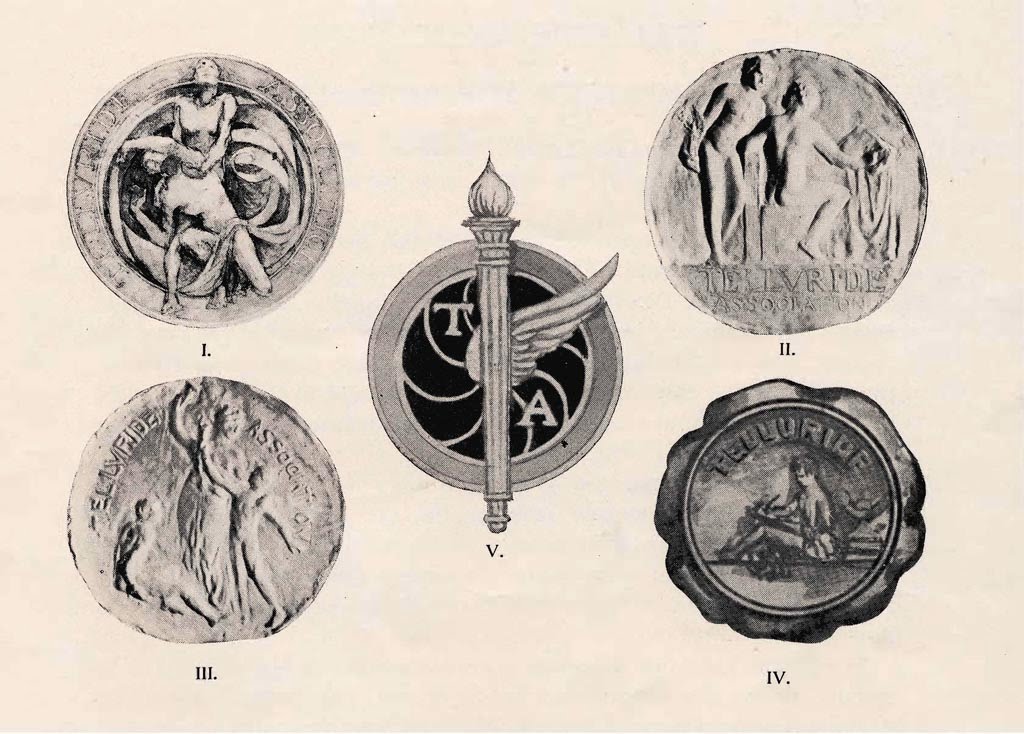 15 Dec An Emblem for the Association

The excerpts below refer to a very early effort on the part of Telluride Association to develop an emblem for itself. The effort was “crowd-sourced,” and generated a fair amount of discussion. Apparently, however, the early efforts led to naught…

From 1912 Proceedings, pp. 23-24.
Mr. Ray submitted a letter from L.L. Vincent in which he gave two designs for an emblem, and various suggestions in regard to the way in which either might be manufactured in case one or the other was accepted as the Association emblem. These emblems have as their basic idea the Wheel of Fortune combined with the Torch of Knowledge. The following is an extract from the minutes in regard to this matter:

“Wegg moved that is in the sense of this convention that an emblem be adopted at this time, that the emblem without the wing is the one desired and that a committee of three be appointed to carry the work to ultimate completion. Parker moved to amend the motion ‘that design with wing is preferable.’ Munroe moved as an amendment that a committee of five instead of three be appointed. Howard seconded Parker’s amendment. Mr. Nunn stated that he felt we were not ready to adopt the emblem; thought that matter should be referred to a committee with instructions to take up with those fit give advice and added that he hoped it would not be rushed through. Mr. Nunn moved that we table Mr. Wegg’s motion with the amendments. Ashworth seconded. Miller arose to urge the adoption of a pin. Ruled out of order. Standing vote taken, showing 42 for and 30 against. Motion carried.

Ashworth moved that a committee of eleven be appointed to investigate matter of pin for next year and that a sum of $30.00 be appropriated from Convention Expense, in order that committee could get out design. Munroe seconded. Townsend suggested that smaller committee be appointed. Parker amended the motion to read: ‘Committee of five from one place, such committee to confer with a member of each one of the other branches.’ B.S. Walcott seconded. Amendment carried. Motion as amended carried. Ashworth suggested that Ellms be made a member of above committee.”

In accordance with the above motion the following committee on emblem was appointed: D.S. Wegg, chairman; W.V. Ellms, McRea Parker, W.D. Alexander and W.H. Maguire. Mr. L.L. Vincent was tendered a vote of thanks for his work done toward selecting an emblem for the Association.

1914 Proceedings, p. 50.
“The committee appointed at the 1913 convention to investigate for the Association the matter of an emblem reported their recommendation, that no selection of an emblem and seal be made at this time. This report was adopted.”

Recent years
There have been some conversations in recent years at the Association about a new logo, its artistic merit, philosophical meaning and accurate representation. The images shared above were reconsidered and generated some interest:

Some of the ideas for a new logo that members brought up were:

Members also talked about what values the logo should represent and what emotions should it elicit:

These discussions in 2009 led to the adoption of our current emblem – the T in the orange circle. What are your thoughts on the logo? Does it capture the history and values of the Association?