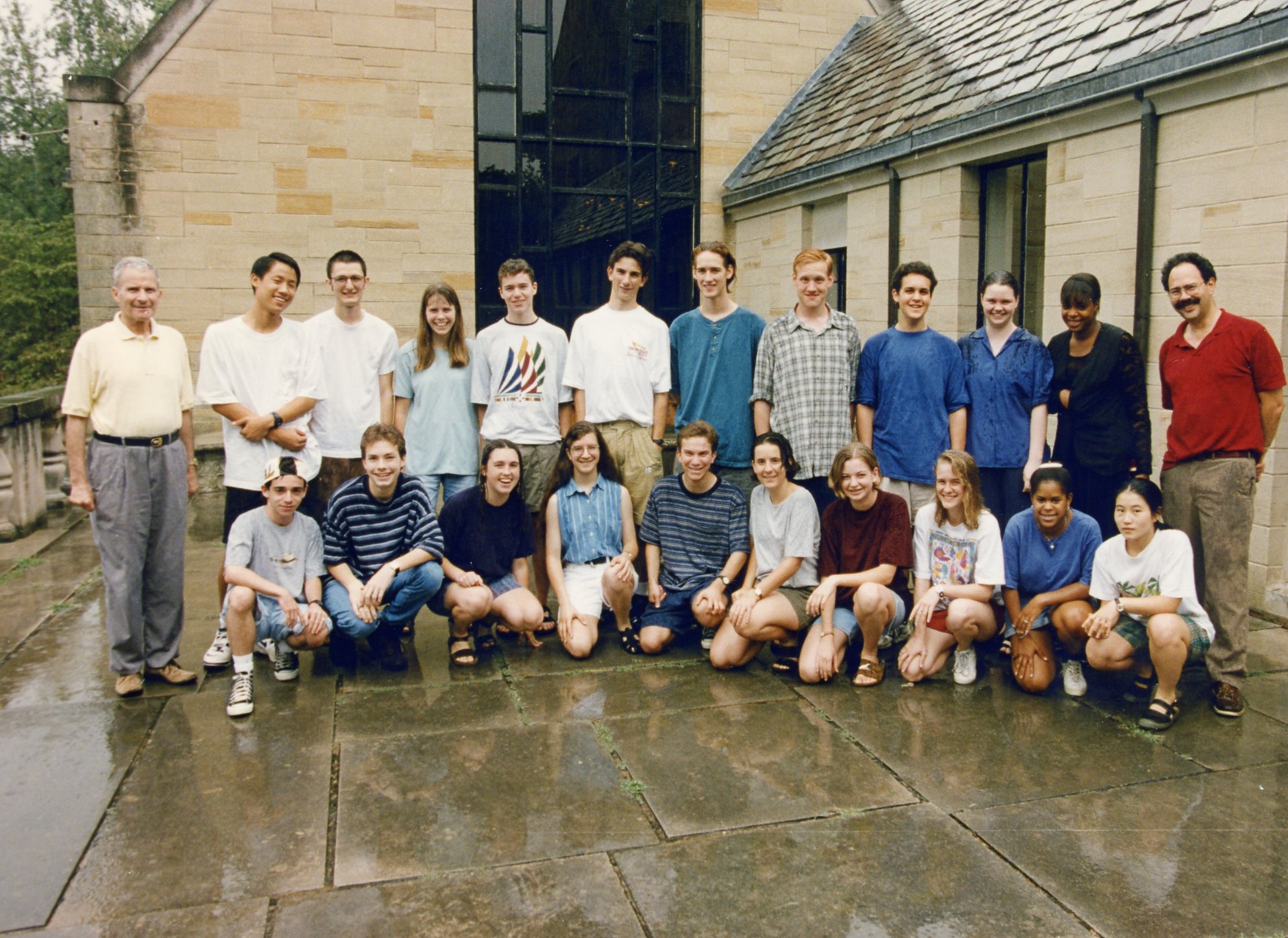 Harry Clor, beloved professor of Political Science at Kenyon College, taught Telluride Summer Programs in 1975, 1979, 1985, 1995, and 1998. He died in 2018 and his friend and Kenyon colleague Fred Baumann CB62 TA64 wrote this moving tribute that was published in the Weekly Standard. We reprint it below with his, and the publisher’s, permission.

Remembering the Kenyon College professor who wrote the book on moderation.

John McCain died on Saturday, August 25. The world rightly took notice. That same night Harry Clor died. So? Who was he that the STANDARD should take notice? Like the senator, Clor was suffering from terminal cancer. He was older than McCain, 89, and had been retired from Kenyon College since 1999, where he had taught for 34 years. He was not a war hero or an actor in the world of politics. True, he was a veteran who served in Korea, but as a healer, in a psychiatric MASH unit. He lived and died in a small town, happily married with two children. 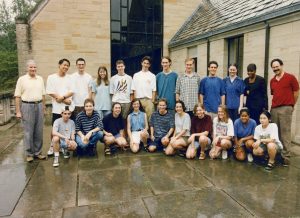 And in the smaller but still reasonably extensive world of intellectual discourse, he was well known as a constitutional lawyer and defender of the position that society needs moral regulation and should, even if just minimally, legislate to that end. In our day it was a losing cause, as the late Walter Berns granted in his review of Clor’s book on public morality, but Clor made his case with care, generosity, and moderation. The book Harry wrote in retirement, in defense of the virtue of moderation, also made a mark, though, as usual, one smaller than it deserved.

But none of that explains why Harry Clor needs to be remembered by those who did not know him and love him as we at Kenyon did. Simply, he was one of the greatest of teachers in the tradition of real liberal education, a tradition that is so beleaguered that it can reasonably be said to be dying in American universities and even in what are still called liberal arts colleges. That is, Harry Clor is an emblem for the tradition his life exempliﬁed and expressed, for what it offered and what it required of its followers. His death reminds us of why the loss of that tradition would be an enormous tragedy for our whole society, including those parts that have never had the slightest brush with it.

Liberal education has its name because it means the education appropriate for free, self- governing people. Liberal education is, as Harry’s favorite philosopher Aristotle taught, both a matter of intellectual and moral instruction. For Aristotle, intellectual virtue is the higher form of the two. Harry Clor, however, showed in every class he taught how intellectual clarity and moral probity interpenetrate in practice. His was the clearest of minds and made very complex things clear to his students without sacriﬁcing complexity. The chairman of Kenyon’s Board of Trustees describes him as the best constitutional lawyer he has known, better at making things clear than the best that Harvard Law had to offer. But in order to do that, Harry had to be able to give due weight (and sometimes even more than that) to all the voices and possibilities in the argument. That took the very virtue of moderation that he preached while he exempliﬁed it. In turn, that adherence to the difﬁculty of the problem, the loyalty to the question above any particular answer, not only made his answers qualiﬁed and prudent, but forced him and his students deeper and deeper into the matter. Once more in turn, this developed in his students (and his colleagues who, like me, were his students as well), the disposition to suspend quick judgments and to prefer puzzled, partial understanding to glib or self-righteous pronouncement. Moral and intellectual education became inseparable for us, as they were in him. And if some of us (I speak for myself here) were temperamentally unable to achieve his level of sobriety and dispassion, at least we knew what we ought to aim for.

Harry was the best seminar teacher I have known (Allan Bloom was the best, most magnetic lecturer). One could say of Harry what was said about one of his teachers, Joseph Cropsey, that “he beat around the bush until it burned.” Harry would begin with some apparently anodyne introductory remark, phrased gently in a wispy voice that already 35 years ago had Dr. Leon Kass worrying about possible throat cancer. Then came a great show of ﬁlling his pipe (this was before campus smoking was banned indoors—one of the ﬁrst and doubtless benign triumphs of the New Puritanism that reigns less benignly over us today). There followed a clarifying question and then patient waiting (perhaps the hardest thing for many teachers).

And after that ﬁrst, tentative response, without ever giving the game away, he would guide the students so gently that I could never ﬁgure out how he did it. Somehow, usually within 15 minutes, some reasonably intelligent undergraduates were debating issues in, say, criminal law, as though they were knowledgeable graduate students. It was magic and it was self- effacing.

Outside the classroom, in the occasionally stormy politics of department and college, Harry, though no war hero, was a peace hero. He sought, sometimes with success, to get both sides to recognize their common concerns, or at least to patch up their differences for the sake of the overriding institutional good. But when liberal education was challenged by the forces of the new piety, which insisted on obedience in the name of freedom, on uniformity in the name of diversity and on dogmatic answers rather than questions, Harry Clor stood up “like,” as we used to sing, “a tree planted by the water.” His gifts of patience and understanding were joined by an unyielding courage, made all the more effective by how persuasive his clarity and depth of understanding allowed him to be. To put it bluntly, liberal education survived at Kenyon in the 1980s, when it was swamped in other, more famous schools, in considerable part because of Harry Clor. That in turn meant that Kenyon would continue to send into the worlds of public affairs and education a disproportionate number of able, intelligent, serious, sensible public servants and teachers who provide a counterweight to the noisy gasbags that afﬂict us on all sides today.

Harry’s health was legendary in its fragility. He hadn’t expected to live through his 50s. Triple bypasses, stents, blood cancer, diabetes, near crippling bouts of arthritis, made him live with the prospect of imminent death for much of his adult life. So he had practice following Montaigne’s advice of taking the sting out of death by its perpetual (and not morbid) contemplation. Still, when I saw him in his last days retain the same unrufﬂed, humorous, even witty acceptance of his situation and of all the indignities that come with a body that is falling apart, I had conﬁrmed what I had already known: True moderation is inseparable from tremendous toughness, from real, and with Harry as always, concealed and understated courage. I don’t think it is carrying the analogy between him and the tradition of liberal education too far to say that he was an emblem of liberal education in that way as well. The seriousness (not earnestness) of the genuine search for the truth about things isn’t showy. It doesn’t assume stagey postures and thunder from the mountaintop, in the style of so many preachers of the new orthodoxy, who merely reveal their vanity in every gesture of glamorous selﬂessness. By contrast, the seriousness that comes with liberal education is all the greater for being sober, quiet, but in the end, those who follow it, live it, and who learned about it from someone like Harry Clor, are stronger than their showboating opponents. Harry Clor died the same day as John McCain. But Clor’s life, in his way, like John McCain’s in his, should give us some conﬁdence, not in ultimate triumph (what an absurdity to expect that in a world understood seriously) but in the ultimate survival of real thinking and real feeling, even in a world where the fake abounds.