Staffing TASP 2018: An Experience From the Side

22 Aug Staffing TASP 2018: An Experience From the Side

Posted at 10:03h in Blog, Uncategorized by trail 0 Comments
1 Like

TASPers hanging out on at a summer concert on Cornell’s Arts Quad one Friday evening. TASPers loved Ithaca sunsets and would often go to Cornell’s slope an hour before the sunset to catch the colorful skies.

Just until 3 weeks ago, I was supervising a group of promising high schoolers who were cleaning the kitchen after dinner. The weather that week had been damp and gloomy in Ithaca, in contrast to the usual sunny and crisp skies we had seen this summer. These students, who will be starting their junior or senior years in high school this fall, worked tirelessly in the poorly ventilated kitchen and dining room of the Telluride House at Cornell University to uphold our high standards of immaculate cleanliness.

However, the students were conspicuously apprehensive about these mundane cleaning tasks. Many of them had never mopped the floor, taken out trash to dumpsters, or worked in close proximity to discarded, foul-smelling food scraps, and it was a challenge for me to teach and supervise them. It was an even bigger challenge to supervise them without getting mad at their mistakes and talking in a frustrated voice after a long day.

Telluride’s summer programs are meant to be 6-week long self-governing learning experiments, in which the students do everything (almost). They participate in seminars facilitated by college professor and “factotums,” who do everything. Students work in service projects in the town and act as responsible stewards of the living space. The programs are more unique in the way that the students manage and govern their group themselves, conduct house meetings, and contribute to a semi-monastic community focused inwards to enrich intellectual inquiry in themselves and peers in the group. Cleaning the kitchen is one of many tasks the students had.

I was not a high schooler among them, and neither was I a college professor or one of the factotums. I was one of the two Program Assistants (PAs) at the Cornell TASP this summer, charged with assisting the program by organizing students and supervising their activities. I think PAs are in a weird position because they aren’t involved in the community as the students, factotums, or professors, but are still involved in daily tasks. Even though one works only part-time as a PA, the job description literally says to “provide logistical support to factotums,” which encompasses every kind of help that anyone in the program needs.

Program assisting was difficult for me, especially when I was busy with a full-time summer research job at Cornell and as a member of the preferment committee in Cornell Branch starting in the fall.

More than difficult actually, I think it was an interesting experience. It was definitely awkward conveying instructions and duties to students just about my age, but I think openness, cooperation and an understanding of raw humor led us all to glory.

Before the program had begun, I had received advice to keep my beard long so as to look grown up and maintain a sense of authority and respect in TASPers. I was definitely not good at it as my voice was sharp and unusually excited for someone pretending to be older. Moreover, I would share meals with students and factotums, and hang out in common areas after my research lab work was over, which diminished my sense of authority over students. It probably also made them think that I was not of the age they thought me to be, and I recall surprising many TASPers throughout the 6 weeks when I talked about my undergraduate classes and research at Cornell. All this time I had a thick beard on me, which I guess baffled them repeatedly.

You may wonder why I am highlighting myself “sharing meals” and “hanging out.” Aren’t these activities that everyone should always partake in?

Some background first: I never went to a summer program in high school. In fact, I didn’t even know that such programs existed, offering numerous opportunities for growth for free. I chose this PA job since I wanted to experience a high school summer program vicariously, having not went to one. I wanted to see for myself if the hype around these summer programs lived up to its expectations. I’m talking about the hype that is lucidly worded in Wikipedia:

According to CollegeConfidential.com, those who are selected to participate in the TASP program “are likely to get special attention in admission offices when it’s time to apply to college” due to the program’s selective nature, with an “application process [that is] equally, if not more, competitive than those of the Ivy League.” Participants in the TASP program have been described as being some of the “brightest rising high school seniors in the country.”

Quite early in the program did I learn that the hype was off-center. It was not misplaced in that TA summer program attendees do go to good colleges, but it was off-center in that it misjudged the cause of attendees’ success. It wasn’t TASS or TASP that made these students “bright” or likely to get special attention by college admissions, but the cause was the students themselves. Their disposition and willingness to learn was on a different level. The program recruiters had successfully tapped into hidden talent, and I was glad to be around people who had interesting trains of thought. The programs merely acted as open testing grounds for these students, who were responsible as individuals and members of the community to make their 6 weeks meaningful. Getting to know them closely was definitely a plus. However, all this interaction involved emotional labor and time from my side, often while “sharing meals” or “hanging out.” 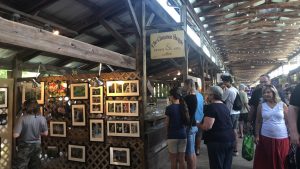 Although I have been at Cornell for the past 2 years, only this summer did I get a chance to visit Ithaca’s Farmer Market. This was one of many field trips organized by the Cornell TASP.

I loved talking about ideas and taking part in Capitalism vs Communism debates, but that reduced my commitment to my research job. I loved playing (and defeating everyone at) ping pong on late nights, but that hampered how many lectures of a Probability course and how many pages of a Deep Learning book I could read. I wanted to do so many things, and I felt that I had not anticipated such a large time-draw while PA-ing. Now that my semester has started, I realize how much more about Computer Science I could have learned had I not PA-ed.

But again, I loved talking about my research with these students and program staff and telling them more about Computer Science research. I can’t stress enough how much I liked doing that. I felt fortunate that most of the program participants (students and staff alike) were interested in knowing more about my work, a feeling I had not found in other places. Not to say that the Cornell Branch or even Cornell does not foster such conversations, but the self-monasticism of summer programs and the fact that all participants do the same seminar and live together for all of the 6 weeks made an unprecedented, positive difference in my conversations.

We PAs would also supervise kitchen shifts after all 3 meals and would direct students to do a range of tasks from sanitizing dishes in a “Hobart machine” to carrying the trash and compost bins outside. I was often amused and frustrated at how many of the students had never done those tasks, especially when most duties were imperative to independent as well as cooperative living. Knowing the different backgrounds they had been through was truly enlightening for me, and helped me communicate more effectively. Yet again, time-draw was a problem for me, especially when these duties and several other requests from program staff would pop up unexpectedly during the day.

I think my PA experience was mixed. Close proximity to students worked both ways for me and I can find arguments on both sides while evaluating other aspects of the PA job. It was intense, brilliant, amusing, formative, and frustrating simultaneously.

In the end, I believe I somewhat did meet one of my goals I set out before the summer program: to experience the program vicariously. I had not thought of how this vicarious experience would have taken form during the 6 weeks, which caused me confusion and trouble during my time in Ithaca. Or maybe the lack of a well-thought plan was a boon to my experience, letting me enjoy unexpected moments raw. The latter definitely sounds cooler, but it was a disaster in disguise when it came to managing time for multiple jobs and projects during the summer.

So would I do it again? I don’t know. As much as I enjoy the spirit of decision trees and prediction in Computer Science, I don’t make decisions for my next summer 12 months in advance.