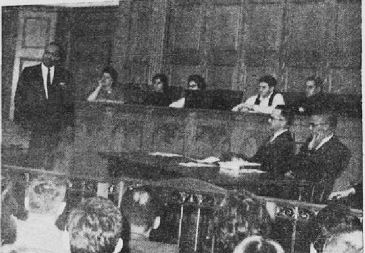 Posted at 09:56h in Blog by Michael Becker 3 Comments
2 Likes 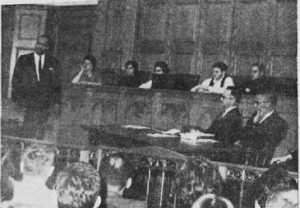 James Farmer (far left), director of Congress on Racial Equality, addresses the audience at the Cornell debate, as moderator Rev. Paul L. Jacquith, director of CURW, and Malcolm X (far right) of the Nation of Islam look on. Used with permission of the Cornell Sun. By 1962 Sun staff photographer Robert F. Levy.

In May 1962, Cornell hosted a remarkable debate between two leading intellectuals and activists around Black freedom: Malcolm X, then representing Elijah Muhammed’s Nation of Islam, and James Farmer, president of CORE, the Congress of Racial Equality. At the time of their debate, Farmer’s name was on the nation’s lips. He had achieved nationwide celebrity as the originator and spokesperson of the Freedom Rides, in which integrated groups of Black and white passengers rode interstate buses in mixed accomodations into southern states. The buses were invariably met with protests and violence, sparking the Justice Department to take reluctant action in support of integrated interstate transportation. Malcolm X was still seen as a chief deputy of Elijah Muhammed and noted for his advocacy of racial separatism, his strong criticism of the emphasis of the civil rights movement on Black participation in the formal political process, and a firm advocate of Black self-defense “by any means necessary.” He had earned a reputation as a powerful orator and had already garnered international interest, meeting with leaders from Egypt’s Gamal Abdel Nasser, Ahmed Sékou Touré of Guinea, and Fidel Castro.

The sponsoring campus organizations – Cornell United Religious Work, Dialogue Magazine, and the Cornell Committee Against Segregation –  glossed the debate as a contrast between separation (represented by X) and integration (represented by Farmer). Campus interest was high; there were more people interested  in attending the event than available tickets, and sponsoring organizations were unable to secure a larger venue at short notice. According to Cornell Sun reports, Farmer described Americans as suffering from a split personality, believing in freedom, democracy, and equality, but failing to practice it. He claimed that Black

Americans were solving their own problem, through organizing Freedom Rides and sit-ins in a quest for integration. X, to the contrary, decried white Americans as hypocrites for their stated belief in equality and freedom, and said that Black Muslims were not interested in integrating with people who did not want them. The Cornell Sun’s writers were clearly more sympathetic to Farmer’s argument, but expressed surprise at X’s eloquence and poise. Some writers clearly viewed X and his message suspiciously; one unnamed columnist charged that X had softened his message for a predominantly white college audience and was fomenting rage in working class Black communities that would harm efforts at racial harmony. Reporting by the Sun underscores that many Cornellians placed greater emphasis on the tone and ‘civility’ of civil rights discourse than the denied freedoms and civil liberties of African Americans.

Following the debate, both men attended a reception at Telluride House. Brian Kennedy SP60 CB61 TA63, then a CBTA freshman, describes the scene as follows: “After the debate, both came down to Telluride House for what seemed a rather well-attended reception. As you turned left from CBTA’s front door into the living room, immediately on the right was the refreshments table. Just beyond it, along the wall, was a couch. Seated alone at the center of the couch, with a crowded circle of us around him, listening and questioning, was the spellbinding borderline-strident ascetic Malcolm X, commanding the room. One young black woman…, politely fast on her feet, was strikingly articulate in contesting his domineering separatist vision… Standing directly in front of Malcolm X, maybe 15 feet away, with a softly-speaking smaller circle standing around him, was James Farmer, nursing a tumbler of whisky.” It’s unclear if either man stayed at Telluride House during their visit to Cornell, although neither have signed the guest book. It is worth noting that their visit occurred during prominent conservative intellectual Allan Bloom’s residence and while future World Bank President and US Deputy Secretary of Defense Paul Wolfowitz SP60 CB61 TA62 was a house member.

In the next semester, the House was also paid a visit by the famous novelist, essayist and cultural critic James Baldwin. At this point, Baldwin had published two novels: Go Tell it on the Mountain, a coming-of-age story of Black teenager Charles Grimes and his evolving relationship to the Pentecostal Church, and Giovanni’s Room, noteworthy for bringing a complex representation of homosexuality and bisexuality to a broader reading public. Two of Baldwin’s both notable essay collections, Notes of a Native Son, and Nobody Knows My Names, had also been released. We know of his visit from a signature in our guest book and a rather bland notice from the 1963 CBTA President’s report, which describes him only as a “Negro writer.” Yet, the Cornell Sun contains no coverage of his visit, as it would of many lectures and public presentations on campus, although certainly not all. Initial inquiries to a few alums from this period have not – as of yet – yielded any specific memories of his visit. We would love to know more, if any blog readers were around CBTA at the time.