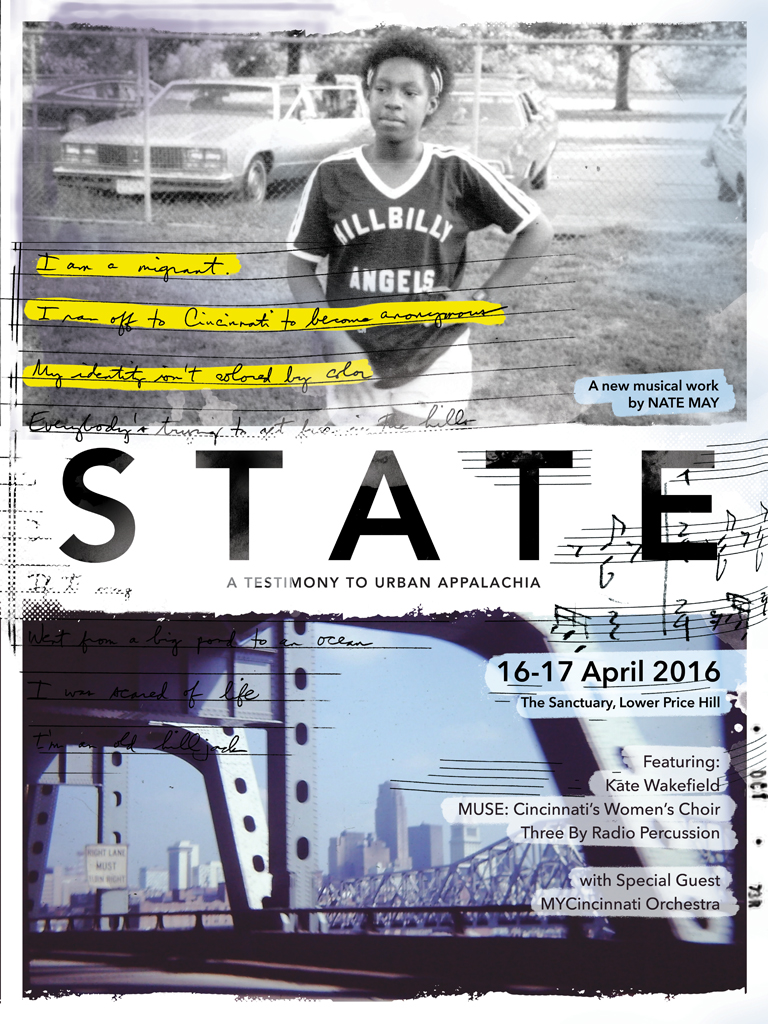 Posted at 09:41h in Blog by Maia Dedrick 0 Comments

In April 2014 I was working as a high school math teacher in Fayette County, West Virginia, when I accepted an offer to begin a master’s degree in music composition in the coming fall at the College-Conservatory of Music in Cincinnati. I was raised in West Virginia, and the state had grown in importance to me during my time in Cape Town, South Africa, through Telluride’s Reese Miller Exchange: seeing the relationship that the musicians I worked with had with their homeplace, I had started to think of West Virginia as mine. Beginning with a collaboration with Andrew Munn, an opera singer who I met at Telluride’s Michigan Branch, and who later spent four years as a community organizer in West Virginia’s coalfields, Appalachia’s land and people had become a powerful force in my personal and artistic life, inspiring a move back to the state after two years of freelancing in Michigan. It was difficult to leave West Virginia again at age twenty-seven, but I soon learned that I was retracing a path worn by Appalachians who migrated to Midwestern cities in staggering numbers, especially between 1940 and 1970, when coal jobs were drying up and growth in industry was demanding a larger urban workforce. From the beginning of my time in Cincinnati I knew I wanted to respond musically to this past and present reality. Over the course of the next two years it evolved into the most ambitious project I’ve undertaken to date. 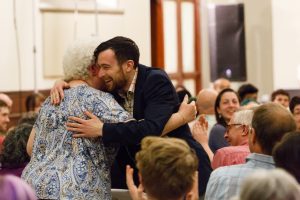 By the time it premiered in April of 2016, State was a 35-minute oratorio for a vocal soloist, a women’s choir of roughly fifty voices, three percussionists, piano, and electronics. The premiere took place in Lower Price Hill, a neighborhood of Cincinnati that continues to have a large Appalachian presence. The piece consisted of musical settings of oral histories I collected from Appalachian migrants in the city, along with archival recordings of those who stayed behind in the mountains. Funded by Berea College’s Appalachian Sound Archive, I found urban Appalachians through the help of local organizations and personal connections. After recording many hours of interviews I decided to focus on three women, using their words exactly as they were spoken to me. Aileen, the daughter of a coal miner in Laurel Fork, Kentucky, tells of her father’s Black Lung and her uncle’s death in the mines. She took a Greyhound bus to Cincinnati at a young age, where she met her husband, another Kentuckian, and started a family with the principles they had learned in the mountains. Debbie’s touching story is one that many can relate to, regardless of geography: she speaks of her mother’s dementia and death, and the bonds of love that can endure the alienation of a mother who no longer recognizes her own child. Omope, an African-American woman who grew up in an abolition town in Appalachian Ohio, recounts her childhood in a largely unsegregated community when much of the country was suffering Jim Crow-era violence and tensions. When she had children of her own in Cincinnati, she made sure to bring them back regularly to her hometown in order to pass on the connection she felt to the region.

As I had in my previous Appalachian work, I created some confusion by not appropriating the great oral traditions of mountain music, a select few of which have become the exclusive soundmark of Appalachia as it is depicted in most media. As a West Virginian who, like most living Appalachians, did not grow up immersed in those traditions, I was interested in portraying an Appalachia that is both unexpected and familiar—unexpected in its layering of geographies, histories, and identities, and familiar in the universality of its people’s stories. I wrote the music in a contemporary and personal compositional style, and included a banjo repurposed as a percussion instrument to pay homage to the instrument’s West African origins and to subversively acknowledge the expectations for what Appalachian music should sound like. Other repurposed instruments were selected from meaningful objects mentioned by the interview contributors: scrap metal, a set of cast-iron skillets, a music box. The choir sang as a swarm while the soloist, Kate Wakefield, who was trained as an opera singer but now tours as part of the two-piece punk band Lung, brilliantly navigated the serpentine melodic material.

Creating and producing State taught me many things—about the therapeutic power of simply asking someone to tell their story; about collaboration not only with musicians but with the people who agreed to let me publicly share their lives; about creating a vision that was difficult to describe in words but depended on the support and investment of many funders, contributors, collaborators, and audience members; and about composing music—an isolated act that required me to channel many bodies, minds, voices, and souls into a whole that I hoped would come out greater than the sum of its parts. The result was instrumental in making my next migration possible: last year I began a doctorate in composition at the Yale School of Music. Connecticut is the farthest from Appalachia I’ve lived since Cape Town, but I return frequently in my thoughts and look forward to the occasional visit when I can confront my nostalgia with reality’s persistent changes.

State: Project by Grantee Nate May from People’s Liberty on Vimeo.