I received the 2017 Yarrow Award to conduct research in Germany and Bosnia and Herzegovina (BiH) as part of an evaluation project for the German humanitarian women’s organization AMICA e.V. Over the course of a six-month period, I assisted in designing a strategy for assessing the impact of AMICA’s programs in BiH over a twenty-five-year period; began constructing a narrative history of this work on the basis of archival materials; and conducted field research with former project participants and beneficiaries in the north Bosnian city of Tuzla.

AMICA e.V. is a humanitarian organization that works with women and girls in post-conflict zones and crisis areas. Founded in 1993, the organization has worked in Ukraine, Lebanon, Libya, Palestine, Turkey, Chechnya, Kosovo, and Bosnia and Herzegovina. AMICA was founded as one of a number of humanitarian initiatives based in Germany that emerged in response to news of the ongoing war in BiH. In particular, reports of mass rapes perpetrated by soldiers against civilians, mostly women, spurred local populations in Freiburg and environs to take action. In 1993, volunteers in various small citizens’ action groups began transporting truckloads of food, medicine, fuel, and other supplies into northeast Bosnia via Croatia, and helped fund a mobile gynecological clinic. A year later, these disparate initiatives had more or less coalesced into a single organization, and a project house had been established in Tuzla to provide psychosocial support to refugee women and their children. Soon, local operations passed into the hands of a partner organization, Prijateljice, founded by local AMICA staff with the encouragement and assistance of their partners in Germany.

The current project was conceived as a way to mark the twenty-fifth anniversary of the organization’s founding, by taking stock of AMICA’s achievements, failures, and changing priorities in the context of developments in BiH in the two and a half decades since the war. The goal was to evaluate the impact of AMICA’s involvement by looking at individual life-circumstances, attitudes, and resilience of former project participants, and in the growth and professionalization of the local partner organization. Achievements were to be put in the context of developments at the institutional level (i.e., legal provisions for victims of sexual violence, refugee return and property restitution, compensation, and war crimes prosecution–and political barriers to all of the above).

A few main questions have guided this project: what long-term impact has AMICA’s work had on its beneficiaries, displaced women who arrived in Tuzla after harrowing and traumatic experiences, often as newly single mothers largely dependent on humanitarian aid for survival? To what extent can we measure this by examining what the lives of these women look like today? More broadly: what do (refugee) women in post-conflict situations need for survival, integration, empowerment–progressively, over time? Are there stages to this work? And finally, what needs to happen at the institutional level to complement the kind of baseline psychosocial work that organizations like AMICA are able to provide?

To begin working on these questions, I spent the summer going through archival materials documenting the early phase of AMICA’s development, including newsletters and yearly reports, press releases and newspaper clippings, board meeting minutes, and correspondence between the local staff in BiH and the coordinators in Germany. On the basis of this documentation, I was able to construct a detailed timeline of the organization’s growth, and to begin collecting elusive information on past donors, grant sums and participant numbers. As I discovered in the course of my research, hundreds of women passed through the five-month program offered at the Project House in Tuzla over the decade following AMICA’s founding. Three times a week, cohorts of roughly 25 women would meet and participate in programs of various kinds. Members were offered individual counseling with a psychologist, but also group therapy, occupational and art therapy in a variety of sewing, cooking, knitting, silk-painting and other courses, and training in relaxation techniques such as yoga and meditation. They received periodic visits from a general practitioner, a dentist, and a gynecologist, and had access to free legal aid when needed. Women facing the existential uncertainty ubiquitous among civilians in Tuzla and especially among refugees could earn money working in small businesses owned by Prijateljice, including a boutique, a laundry, a small farm, and a car wash. Moreover, they participated in computer and English courses and career training in childcare, care for the elderly, and more. Children were accommodated in a daycare facility and received trauma therapy when needed. Women who had graduated from the program at the project house were invited to join neighborhood clubs, where they would continue working with a social worker in small self-help groups. 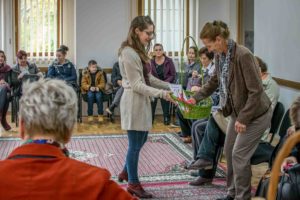 When massive, international community-sponsored refugee-return efforts began in the early 2000’s, the landscape shifted for AMICA and Prijateljice. Many of the refugee women who had formed their core constituency were facing the imminent reality—a possibility or a threat, depending on individual outlook and experience—of eviction from their temporary homes in Tuzla, combined with financial encouragement to return to the villages from which they had been displaced, rebuild their houses, and try to (re)integrate themselves into their old/new communities. AMICA and Prijateljice helped those who wished to stay in Tuzla find a way to do so, but also expanded their work into rural areas in the Drina Valley, an area to which many expellees from Tuzla were returning—now located in the newly established Republika Srpska, or Serb Republic, an entity within Bosnia and Herzegovina. They helped recent returnee women form local associations and offered a package of humanitarian help, psychological support, income-generating activities, and vocational training similar to the program in Tuzla. In the intervening years, Prijateljice has continued to work on projects in these key areas with the help of AMICA and other international donors and state support.

Alongside my efforts to reconstruct this timeline, I worked with a sociology student and with input from the teams at AMICA and Prijateljice, the AMICA board, and local experts in Freiburg to develop a strategy for field research in Tuzla. We hoped to gather data about the impact of AMICA-Prijateljice’s services over the past 25 years and beneficiaries’ present social environments. A questionnaire was developed to obtain demographic and biographical information, quantitative data on self-perceived quality of life, and individual history with AMICA/Prijateljice. In October, I traveled to Tuzla to oversee a series of four meetings at which this questionnaire was distributed in the context of a small workshop and lunch. It was exciting to witness how former members took this opportunity to catch up with one another (often for the first time in years) and to reflect on their individual and collective journeys since their time in the Project House. 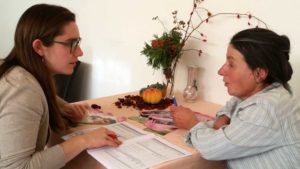 At each meeting, select women volunteered and were given a small time-log diary to fill out over the following 28 days, which we later collected. A month after their questionnaire session, these women—around twenty in total—participated in small focus groups of five to seven women, designed to stimulate reflection and gather input on participants’ daily lives and social environments. I designed the agenda for these meetings with input from the Freiburg office and the Tuzla staff, and was present as a note-taker and observer at all of them; the meetings included small discussions, a mental mapping exercise and group brainstorming sessions. The goal was to obtain information that could shed light on self-reliance, resilience, integration, justice, and the sense of “being at home”: empowerment on the individual, relational and social levels.

I am currently still at AMICA, having secured funding in addition to the Yarrow Award to extend my stay past the fall. In the coming months, I will be working with other members of the evaluation team to produce a thorough report on our research, which will provide material for future publications. While it is too early to speak about definitive findings, it is our hope that this project will furnish us with conclusions that will help to inform not only AMICA’s on-going projects in Bosnia and Herzegovina, but also its work elsewhere—and which will prove useful to other organizations doing psychosocial and advocacy work with women in post-conflict contexts.

This project has meant a lot to me both personally as a scholarly hopeful and in my role as an AMICA team member. As a student of society and culture in Bosnia, as well as of displacement, exile, and migration, my work had until now concentrated on the capital, Sarajevo, and on the international diaspora. Working in Tuzla and the rural areas of the Drina Valley from which  most of AMICA’s beneficiaries fled (and to which many have returned) has been a fascinating new experience for me. My conversations with women who were expelled from their homes and forced to make new lives in an unfamiliar urban environments have furnished me with a new, fascinating perspective on a familiar topic. These have not been easy conversations: expulsion represented the material and symbolic destruction of the places these women called home, and was often accompanied by the orchestrated deaths of male family members and other extreme violence carried out by close neighbors. All along, I have been struck by the extraordinary strength displayed by so many of these women twenty years later; heartened by their achievements, and how far they have come with the benefit of mutual support; and saddened by the ongoing economic hopelessness they and others in BiH face.

Being involved in this project has been a supremely challenging experience for me and a great learning opportunity, although (or, maybe, because) I have frequently been out of my depth. In particular, my role in this project has had an unexpected but significant managerial component: I have basically served as the cultural and linguistic go-between for the German and Bosnian partners, with the sometimes difficult task of fostering good communication and transparency between them. Intellectually, I have been faced with the peculiar situation of having to reconcile my critical impulses as a “scholar” with my role working on this project from within the organization—and to recognize that the goal in this case is to think pragmatically, with a view toward gathering “usable” insights for improvement. Finally, the experience has furnished me with a wealth of material I hope to turn into a master’s thesis next year in a program in Social Anthropology (with AMICA’s blessing).

More broadly, working at AMICA has been extremely valuable in helping me to define the contours of NGO work, in particular in the arena of monitoring and evaluation as requisites to sustainability. I have developed contacts in the Bosnian NGO sector that I hope to strengthen in future, and have been made aware of the some of the themes dominant in civil society there at present. These include, for example, efforts to bolster state-sponsored witness protection and compensation for victims of sexual violence in wartime who wish to testify at the Hague or in the national criminal court. Finally, It has been exciting to see what kinds of applications the research skills and regional expertise I developed in college as a history major have outside of a college campus. My experience working on this project, situated at the intersection of research and action, has helped me become more aware of the diversity of careers in the “humanitarian sector,” and the ways I may be able to keep a foot in both worlds in the future.